Why does a baby stop babbling? Are you worried because your baby stopped babbling? Babbling is a state in language acquisition and child development. You can see babbling as a precursor to your baby’s language development or simply as your baby’s vocal experimentation.

An infant seems to experiment with producing clear sounds but does not yet utter any recognizable words. They might sound like gibberish to us, but they actually signal a crucial stage in children’s language development.

It’s normal if your baby stopped babbling and then starts up again. Because, in the first year of a child’s life, their physical structures linked to babbling are still being developed.

Thus, the continued physical development is liable for some changes in abilities and variations of sound a baby produces.

How Important is Babbling?

Babbling is an important ‘pre-linguistic skill’ and a key marker of speech and language development.

By babbling, your baby is learning how to propel their lips and tongue to replicate the sounds they are hearing. By engaging with their voice, babies understand the building blocks of language. And also, by doing that, they discover how to vibrate their voice.

It turns out that babbling can also be a substantial clinical sign. Delayed babbling can be connected with autism, childhood apraxia of speech, and speech/language delays.

According to a study report by the Journal of Autism and Developmental Disorders, infants who were quieter minds, later diagnosed with autism. Other studies show that children with autism had problems making language-leading sounds.

Stopped talking or delayed talking can also be a red flag for speech/language delays. According to professor Kimbrough Oller and his colleagues, children who have notably smaller expressive vocabularies were those with delayed canonical babbling (after ten months).

What are the Stages of Babbling?

Babbling begins shortly after birth and improves through many stages. Babies start babbling between 4 and 6 months and continue developing their collection of consonant-vowel combination sounds. By the time their repertoire of sounds extends, and vocalizations become more speech-like.

Here’s a look at roughly what to expect when —

During this stage, your baby communicates that he’s hungry or uncomfortable through crying. Your son or baby girl coos and sighs and begins to make sounds for the first time that require his voice box to vibrate, like gurgles. Besides crying, this is the baby’s first sound creation when they are less than a month old.

As your baby begins learning to co-ordinate with his lips and tongue, he/she makes simple speech sounds like ‘goo’ or ‘gaa’ and directs them at you or any objects. Engaging him by babbling or talking back encourages eye contact and simple imitation of sounds. Typically, at around 12-16 weeks, your baby is supposed to laugh in response to things around them.

Simple babbling begins with single-syllable speech, like ba, da, and ma, as your baby experiments with volume, tone, pitch, and intensity. Your life will get noisy as your baby squeals, yells, growls, and blows raspberries.

Actual babbling begins with reduplicated babbling. Reduplicated babbling will sound like ba-ba or na-na. Your heart may explode when your baby says ‘mama’ or ‘mom’, but understanding what he or she is saying comes later. Towards the end of this stage, increased coordination and control of his mouth and voice box opens the door to clear sounds and more defined articulation and resonance. He says the same syllable over and over (ba ba ba ba) and mimics turn-taking as if he’s having a conversation.

In this stage, your baby will use repeated syllables over and over like “bababa,” but without meaning anything specific. Your baby will begin speaking in jargon by using complex babbling dotted with simple words like ‘ba-ba’ ‘da’ ‘ma’ ‘ball’ ‘da.’ This jargon is adorably animated as your son or baby girl imitates conversational inflection, rhythm, facial expressions, and gestures.

Babies should learn to understand the word ‘no’ between 10 and 11 months of age. This is when babies begin various babbling or mixing different sounds (ba de da). Babies also try to imitate noises produced by objects around them. If you build him a block tower and knock it down, he may say boom! He may also shake his head and say no.

Your baby will probably have said their first word, or maybe more, by the time they are 12 months old. A baby’s first word usually comes anywhere between 10 and 15 months.

Remember, words will not be perfect at this time. Consonants made with the lips, like “m” or “b” or “p,” are easier to produce for a baby. Your baby might say “ma-ma” before they say “dada” because “dada” is more challenging, which needs them to use their tongue.

NB: Although your baby’s vocalization timeline may vary.

Although the evolution of babbling follows the timeline above, if your baby stopped babbling or lagging, your pediatrician or a pediatric speech-language pathologist can offer guidance.

Also read: Is it safe to be on Weight Watchers (WW) During Pregnancy?

Is It Concerning If Babies Stop Babbling?

Your baby’s not producing age-appropriate babbling or stopped talking may indicate a significant issue such as hearing loss. It may also mean communication and language delay or learning inability. However, this is not common, as some babies may babble at later stages than expected. And this is somewhat normal, as I mentioned earlier.

Causes for you to concern are-

If you have any of these concerns mentioned above, consult with your pediatrician or discuss with the existing one.

How Long To Microwave Milk

What to Do When My Child Swallows a Marble?

Weaning An Infant With Disabilities

How Can I Improve My Baby’s Babbling?

Recent studies show that babies tend to pick up communication skills quicker if their parents react to their babbles with supportive language signs. So when your baby says “ba-ba-ba,” you can encourage his language development by responding.

Here are some other proven methods you can use as tools to improve your baby’s babbling:

You can also watch the below video of an expert advice about Baby’s Speech and Babbling.

So as parents, you just have a playful time with your baby, as much as you can. Play with them, talk with them, and even sometimes you can softly tickle babies (don’t overdo it) to make them gear up their voice. Though most babies become ticklish after they are 4 months old, and some babies can take up to 6 months.

There’s no wrong way to talk to your baby. Don’t worry that you’re reinforcing “nonsense talk” by babbling back to him. Even the silliest sound will help your baby practice the mouth movement he needs for his first word.

Read: Is it safe for Kids to Take Tums? (Doctor Recommendation)

At this point, hopefully, you’ve got your answers on why the baby stops babbling and what you should do if they do.

Undoubtedly babbling is the first essential step to language development. As your baby is learning new motor skills and starting to babble, he/she might have sleep regression which is quite common. Consult with a pediatrician if he/she does have regression. People tend to overlook quiet babies as they are often thought of as “good babies.” Please pay attention to it. Delayed babbling can be a significant indicator of later communication delays and other developmental dysfunctions.

My name is Kinga. I am a young and proud mom of my one and only daughter Lucy. My 3 years of Babysitting experience made my parenting life quite easy. I do a lot of research before buying baby products for Lucy and love to share my reviews and suggestions with young parents. 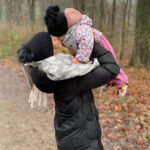 Hi Everyone! My name is Kinga. I am a young and super proud mom of my princess Lucy. My 3 years of Babysitting experience made my parenting life quite easy. I do a lot of research before buying baby products for Lucy and love to share my reviews and suggestions with young parents. Read more

How do I review products?

You know I am a Mom, a Babysitter and I have a little daughter 🙂

I need to buy always new products for my daughter such as swing, walker, crib or different toys.

Whenever I buy something I write review. I get a small commission when you buy and it helps me to buy more toys and make Lucy (my daughter) happy <3

However, the final buying  decision is completely yours. My blog is just for informational and helping purposes. So before buying anything, always check more customer opinions and take decision based on your requirements and budget.

When you buy through links on our site, we may earn an affiliate commission at no cost to you.